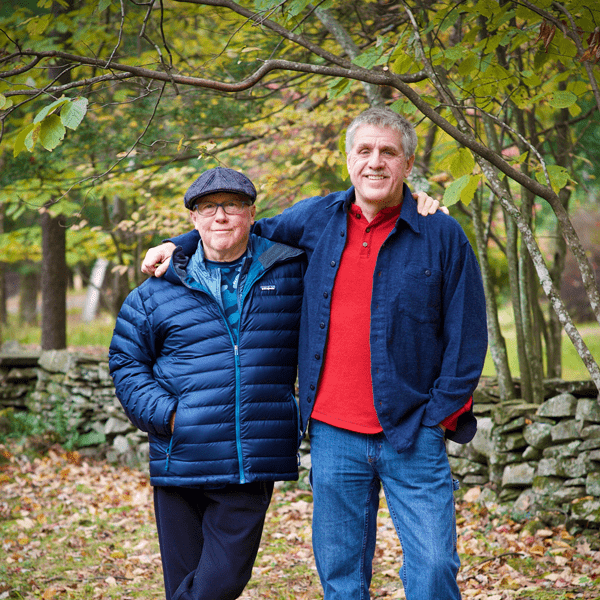 In the early 70’s Dan Erlewine built custom guitars for iconic guitarists that molded the sound of American pop culture. These one of a kind instruments were made to the specifications of the performers that was unique in style and sound.

Decades later Bryan Galloup joined Dan in his shop as an apprentice and together they continued building and repairing guitars in the Erlewine tradition.

Now three decades later, Dan and Bryan have re-teamed to reproduce two of these iconic instruments, the Albert King “V” and the Jerry Garcia Stratishcaster. All tone woods are sonically tested through Bryan’s patented Instrument Making Software™ to ensure these instruments not only look the same, the player will experience the same feel, weight and response of the original instruments.” 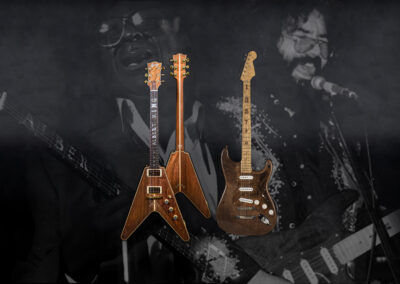 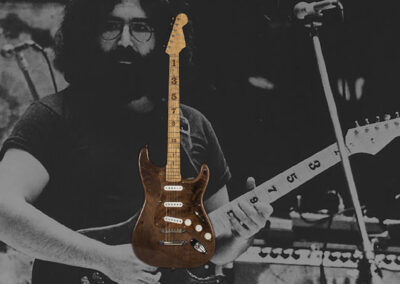 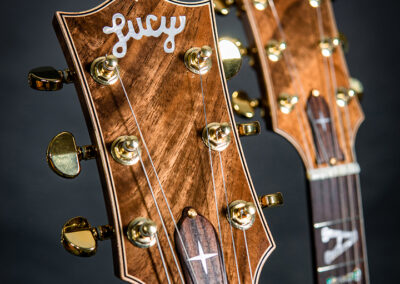 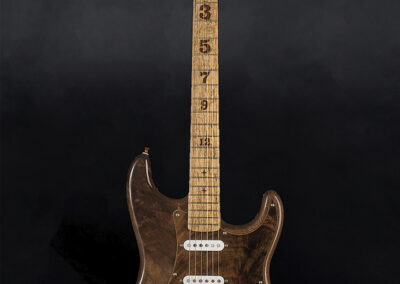 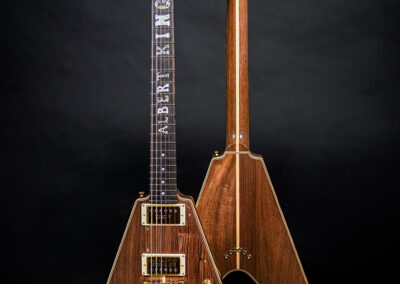 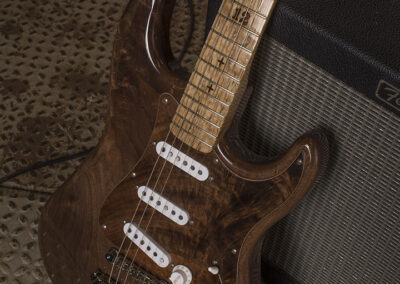 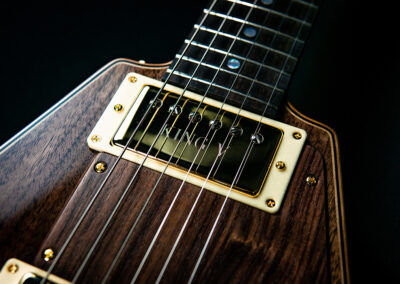 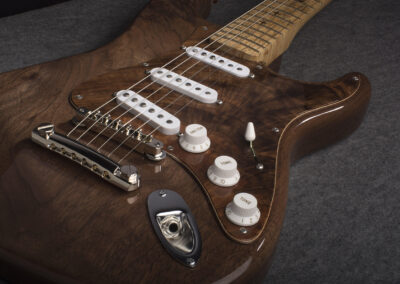 359 10
View Open
Just found this one on my phone. My Stewmac compad

A Special Event Sunday 3pm!! Ian Davlin ianhatesguitars will be hosting the one and only Dan Erlewine monsterfret to talk about the greatest contraption known to the fretting universe!  The Neck Jig!  Dan invented the neck jig decades ago and it changed the world of fretting forever.

I've been a neck jigger for more than 30 years and I gotta tell you, I'm excited about this one.  Dan's going to be covering the what, why and how of the jig and it's history.   Scroll through the pictures to see some of the versions of the neck jig we've use over the years and some fun we've had with the greatest mousetrap ever created!

How can you participate? Easy,  join Ian's IHG patreon group at ianhatesguitars.com to get in on the fun. Ian's group of wayward luthiers is a fantastic platform to get to know other looths, learn from one another about the craft and connect with luthierians from all over the planet.  The greatest part is the "Loothalong" where twice a week you can work in your shop with dozens of other luthiers,  learn from one another,  ask questions,  talk shop and get advice.  Just this afternoon while working in my touch-up room I was hanging with Dan and Evan Gluck newyorkguitarrepair talking about jigs, frets, finishing and vises - until the conversation moved to Dan's gourmet fried sandwiches.

For less than the price of the cup of Starbucks you spilled on your bench this morning you could have been hanging out with us.  Head over to ianhatesguitars.com or ianhatesguitars to sign up before the big event with Dan tomorrow.

I'll be there and participating.   I'll see you there!

Makers & Shakers: After 50 Years at the Forefront of the Guitar Repair Industry, Dan Erlewine Is at the Top of His Game. Link in bio.
.
Six decades after he first began working with guitars, Erlewine says the internet has changed repair tutorials exponentially. He’s hopeful about the future, too.
.
monsterfret #guitars #acousticguitar #guitarist #luthier #guitarrepair #danerlewine #guitarist #guitar #acousticguitars #acoustic #capo ...

Did a safe distance hang with this fine fellow this evening for the first time in nearly 3 months. #guitarrepair #danerlewine ...

The 1970 built Dan Erlewine Strat custom ordered by Jerry and played in 1972. Dan is a Luthier that has a rather giant Luthier retail shop online called stewmac.com. You can check out his video about it over there as well as get a quality switch for an OBEL or whole strat kit! I think this Custom Erlewine may have been given to Hunter as he is seen playing it later on.
stewmac_guitar
monsterfret
A quote from Dan about from The Les Paul Forum. "Yeah, I built Jerry a guitar around 1970ish? It was a black walnut bodied Strat with a maple neck. I was into "wood" so it had a rosewood pickguard and other "woody" thinks at the time. I have an 8mm movie of me delivering it to him in the mountains of St. Helena, CA where my wife's uncle owns a ranch. We visited when my oldest daughter was a baby. I charged $500 and Jerry gave me $900!

The guitar wasn't worth it! It was OK, but not compared to custom instruments that luthiers are building today. I ma(d)e the neck with maple laminations running at right angles to the fretboard. It made for a weird neck, I'll tell you because since it was a "maple neck" and had no fretboard the playing surface showed glue joints! I was always a little disatisfied with that. I thought it would have "killer" tone and strength because it was maple out of an ancient piano that I tore apart.

It also had a brass nut - the very first brass nut that I had ever been asked to make.

I have a pic of Jerry with it if you want to see it.

PS: I ran into a young fellow at the GAL Convention in Tacoma perhaps 6 years ago, and his father ended up with that guitar, and then gave it to him. He was pleased to meet me, and I was pleased that he did NOT have the guitar in hand (with all my building and repair buddies around (500 of them)." #waldotronics #jerrygarciatonenerd
#jerrygarcia #gratefuldead #stewmac #danerlewine> ...

We’re honored The Godfather of Guitar Repair monsterfret and crew are sporting the mdm_repairs shirts. The Guitar Player Repair Guide was the gateway drug for so many of us lifers. #lutherie #guitarrepair #danerlewine #livinglegend #whatsonyourbench ...

183 3
View Open
Another snowstorm, can't get to the shop. There'

Another snowstorm, can't get to the shop. There's only so much paperwork a luthier can do working remotely. Catchin' up on my "Danification". Watching monsterfret doin' his thang courtesy of stewmac_guitar

I was gonna go outside and make a guitar shaped snowman but that almost feels like work.

Three decades later, Dan monsterfret and Bryan have re-teamed to reproduce Albert King’s iconic V, “Lucy”. To ensure these instruments not only look and feel the same, Dan used the last of his original Lucy wood to build one for joebonamassa and myself. Very happy to be a part of Dan and Alberts legacy.
.
.
#fried__okra #okrasguitarlounge #albertking #danerlewine millesimeguitars #joebonamassa #lucy #flyingv #joebonamassa ...

Meet Dan’s new shop apprentice, Elyse. She's an OU senior majoring in sociology.
.
After working for a year at Blue Eagle – a local Athen’s music store & vintage guitar institution – learning basic setups and working the counter she got bit (like so many of us do) by the lutherie bug and decided to make it her career.
.
And, there’s no such thing as starting slow when you’re in Dan’s shop – one of Elyse’s first “setup” jobs was a BIG one — stringing and tuning a 1924 Gibson Style-U Harp Guitar.
.
When Elyse discovered several of the tuning posts had string holes that were too small for the new strings, Dan had her remove the tuners, dismantle them, clamp them in a small vice, and drill a slightly larger hole.
.
Then she de-burred the edges of the posts with Mitchell abrasive cord (it’s like sandpaper on a string.)
.
And, after re-installing the tuner she was able to string it up without a hitch (pun intended).
.
And she even got to learn to use the digital calipers in the process.
.
Let’s give her a round of applause for a job well done and a great start to a long career.
.
.
.
.
#welcomeelyse #stewmac #stewartmacdonald #heystewmac #guitar #guitarlove #lutherie #luthiery #luthier #guitarrepair #guitartech #womenluthiers #harpguitar #gibson #gibsonguitar #vintageguitar #vintagegibson #guitarsetup #danerlewine #whatsonyourbench ...